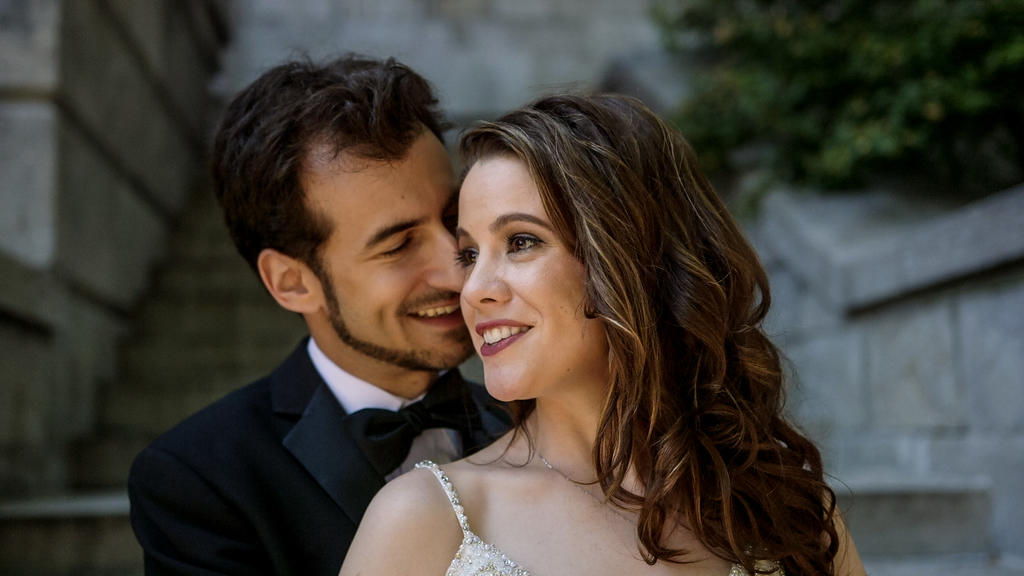 Ger about Mer: I think what really interested me was how much of a nerd she is! She finds almost any kind of knowledge interesting, and even for the things that interested me (of which she was unaware) she quickly became interested and came up to speed. I also was rather awestruck by her phobia of escalators, which is incredibly bizarre, but I guess intriguing. She has perfect pitch and can play most songs beautifully on the piano after hearing them just once! It is almost like magic to mere mortals like me. If I could change one thing I would choose to change two things. Then I would make Meredith like tofu, and like mackerel.

Mer about Ger: I remember Gerry educating me very early on about things in life I had never considered…for example the formation of the Jewish state, and the inconvenience posed by “beard tan lines” if one shaves after many years of having a beard. He cracked me up with how big a dork he was. It was also fun to talk about literature and music and geek out together. : Oh my gosh, did I mention his cooking? It is out of this world! And he gives really good back rubs…which I ask for far too often!!! Coming home to Gerry every day lights up my life, in more ways than would be possible to describe. And this is not just because he makes really good blueberry pie. Maya Angelou once said that “The ache for home lives in all of us, the safe place where we can go as we are and not be questioned.” (With the exception of him questioning me about my boundaries with tofu) in Gerry, I have truly found my home.

Now with Gerry, I got a 2 for one deal, for along with Gerry came Ben. When Ben came catapulting into my life as 3 year old, along came plenty of boogers, action packed days of non-stop Thomas the Train and Lightening McQueen, endless plotting for under the radar vegetable consumption, bedtime stories – and delight unlike any I had previously experienced. The learning curve to becoming a parent was steep, wonderful and hilarious. One of the proudest moments of my life was when I was in the bathroom with Ben, and when approvingly told me that I was “a very good bum-wiper”. A close second was the first time he fell asleep in my lap. Over the past few months, as Ben got increasingly excited about our upcoming marriage, he would unfailingly refer to the wedding as “our wedding” – meaning the three of us. And he could not be more right. It is funny how a child can ultimately teach you the most about what a really means to love and discover that which is most important to you. Ben and I have jointly discovered that while in each other’s presence, our ability to eat brownies is uncannily magnified. He also gives me regular advice on how to schedule my clinics (in particular he made sure several times that I booked the time off work so that we could get married), and whether I should be wearing my batman or my Mario Nintendo t-shirt. Most importantly, Ben has taught me that I did not know what I was missing before having a child’s hand to hold along the way, and all the background chirping and squawking that now illuminates my world. Gerry and Ben together are my family, and the greatest joy in my life.

Meredith, Ben and Gerry are married. Here’s an express edit from they wedding day!

We knew it was going to be a great wedding long before receiving Mer’s practical guide to guests ‘to not falling asleep (during the wedding) and figuring out just what exactly is going on’.

However, we feel obliged to share some highlights from the above-mentioned document. So, read along!

‘This fine informational pamphlet will offer you guidance and suggestions on how to survive yet another hopefully elegant (*cough* pompous) wedding. This is a Jewish wedding, but given that half of you are not Jewish, there are a few things you should know. First, there will be Hebrew. Don’t Panic. (If Gerry had his way, the ceremony would be conducted in Klingon, so it could always be worse.)

The ceremony takes place under the “chuppah”, a white canopy held by four poles that represents the home that the bride and groom will form together. Don’t be fooled by the organized and pristine appearance on stage. In reality, our home is covered with dinosaur toys and crayons.

Blessings are made over two glasses of wine shared by the bride and groom. The second set of blessings is called “sheva brachot” (seven blessings), which are a traditional part of the wedding ceremony. The number of blessings also corresponds to the number of children Gerry would like to have with Meredith. When the ceremony is concluded, the groom breaks a glass under his foot to remind us of the temple of Jerusalem. There are many doctors present in the audience in case this goes badly.

Time to party!! Where do I sit?
There will be a big board outside the reception room listing the tables and seating arrangements. Instead of numbering our tables, the tables are named after Star Trek and Star Wars characters, in addition to a few really obscure science fiction references that no one will recognize. Why? Because we are dorks.

So, uh, what is a Horah dance?
“Horah” is a traditional Jewish dance of celebration performed at weddings. Guests hoist the bride and groom up in chairs and toss them, while they scream for their lives, and the remaining guests dance madly around them in a circle.

That was great. Now what?
Dinner will be served shortly, with a traditional Jewish Blessing, along with the Bride and Groom’s first dance, a special performance by Meredith and Ben and speeches (your favourite, we know. Muahahahahaha!!!).

Time to show off your moves!
FYI, Meredith and Gerry are both really terrible dancers. Especially Gerry, but that doesn’t stop him, even when you beg. You know how people say women marry men like their fathers? First of all, eww. Second of all, while Gerry is not all that similar to Meredith’s dad, Matt is also a really awful dancer. This will shortly be demonstrated to all of you. Ben, however, has some serious moves.’

Indeed Ben does have some serious moves and we attest to that! Mer and Ger are not bad dancers either 😉